India is one of the global leaders in the overall services outsourcing market. This is a well-established fact and outsourcing has contributed significantly to the growth in key Indian cities such as Bangalore, Chennai and Hyderabad since late 90s. Everyone – right from the bigger Industry players such as Microsoft, AOL and Time Inc – to smaller players have benefited greatly from outsourcing to India.

Ad operations have been a key development in outsourcing in India owing largely to skilled professionals and a convenient time zone for Western countries.

During early the 2000s, companies around the globe felt the need to outsource their operations of digital business units due to the nature of the work – which was tedious from the perspective of handling volumes on a day-to-day basis and scaling up the employees also became difficult.

Now India has many centers for ad operations across the country serving to top notch digital clients across the globe with their day to day activities such as campaign launches, reporting, creative QA, tag generation and many other campaign related activities for display advertising.

However, the question we’re really wondering about is how is India heading towards the mobile and video ad serving operations front?

Although there are countless numbers of companies performing ad operations on display advertising at a high performance level, they are still miles away from performing the same on video and mobile platforms. While the skill set exists, the lack of extensive training has yet to promote this leg of ad ops outsourcing.

In addition, from our perspective, outsourcing specialists in India need to move on from the monotonous campaign launches into more evolved work that requires analytical thought.

We believe the resources available here can perform more if asked for more:

Ad Operations Must-Haves – and How Is India Providing Them: 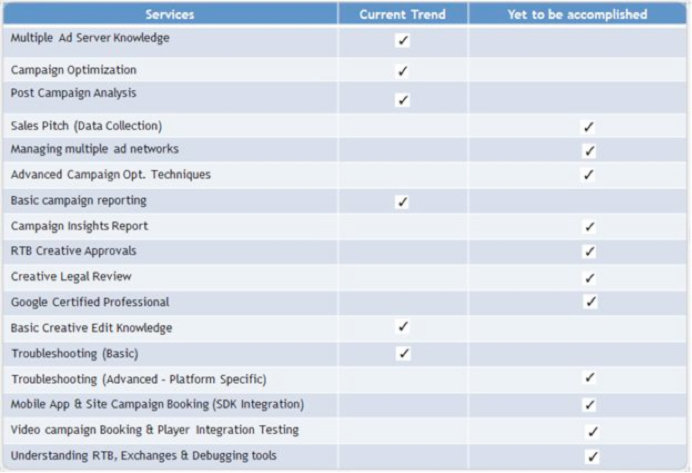 How to bridge this gap?

At the end of the day, outsourcing is extremely viable as long as you put the right people in the right place to manage your regular work, who can then scale to tap some of the analytical and more challenging work in the digital space.

So no tiles – just companions here.

Prabhu Kamalakannan is a passionate technologist and aspires to learn new market trends around digital business space. Having more than sevenyears of experience on working with agencies, publishers, ad network businesses and in product consulting. Actively involved in almost all the ad operations activities right from campaign launches to RTB bid price approval. His clients have included MSN, AOL, Fox News, CBS Radio and other publishers in APAC. Prabhu currently heads the Ad Operations business unit for a start-up Cooolio Online Pvt. Ltd. in Bangalore.

To better understand the role fill rate plays in publisher revenue efforts and what factors have the greatest effect on the metric, AdMonsters surveyed around 60 publisher revenue specialists from a variety of publishers during the month of September 2019. The results showed that while limiting demand partners is a…